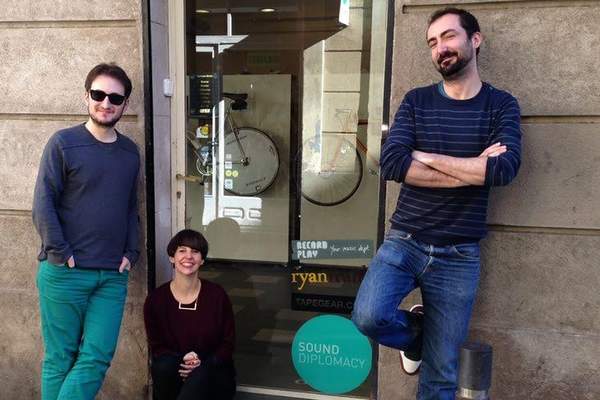 Music may be universal but music promotion is hyper-local. As a former UK and European Representative of the Canadian Independent Music Association, Shain Shapiro saw firsthand that success in one market did not guarantee traction in another.

He launched Sound Diplomacy in May 2013 with co-founder Jordi Puy via offices in London and Barcelona to help musicians, businesses, governments, municipalities, academic institutions, and brands expand into new markets – or in some cases expand their impact and network in markets where they already operate.

Soon after, the two brought on Katja Hermes – who previously worked with a German music organization called Initiative Music and helped launch the German House at the annual SXSW music and technology festival in Austin, Texas – to serve as director of a third flagship office in Berlin.

The trio and their teams plan, promote, and execute twenty-odd music festivals around the world, along with Music Cities Conventions that explore city challenges like planning, policy, licensing, and demography and aim to prove that the music industry can contribute to making cities more sustainable.

Sound Diplomacy also works directly with artists to promote their brands, and has a consulting arm that handles additional strategy work with festival organizers and government-backed entities.

We knew that in our world, where we’re helping to export music, the more international we were, the more competitive we would be,” Shapiro says, whose reach now also extends to India. “The company was always intended to have multiple offices, so we could offer different services to clients in each region while building and leveraging a collective global network.”

While Sound Diplomacy began by leveraging relationships between North America and Europe, Shapiro says that, “our growth markets are Eastern Europe, Central and South America, and Africa. We see growth in what we offer anywhere that has something creative to offer, but lacks the infrastructure to succeed globally.”

“We are completely cloud-based. We have a [customer relationship management] system called Insightly that we use. We use QuickBooks. Our entire company operates on Google Drive,” says Hermes. “We work so much together on the same projects. Without that ability to collaborate in real-time, we couldn’t succeed.”

At the same time, Hermes emphasizes the need to have boots on the ground in different markets.

“Germany is the third strongest music market in the world, and Berlin is a hub for creatives from all over the world, that’s why it is an interesting market to export to or expand your business. But the Germans market is a little conservative. We tend to get nervous about things like security and data protection online. This is actually a selling point for us as a company. We can offer you a resource on the ground to understand the culture and way of making business over here.”

Hermes maintains that this nuanced approach is important for a startup to consider when going global. “Building a team of people you can trust is really important. Have a local presence to help get a solid knowledge of the market you’re going to.”

Shapiro also suggests having a pragmatic yet well-researched approach to expansion. “Grow strategically, not just because you can, and never assume anything. If you never assume, you’re never caught off-guard.”

“And be as relaxed as possible. We do this because we want to, right?”