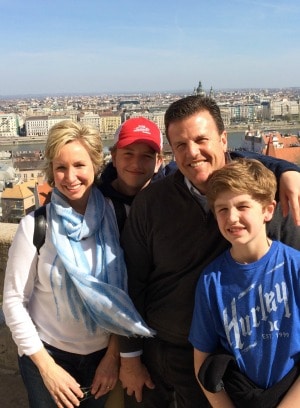 Based in Nashville, Tennessee, The The Pasta Shoppe makes innovative, family-friendly pasta in an array of different shapes and colors for a global customer base.

Founded in 1994, the company has 40 employees at its headquarters and ships to countries on three continents. Its goal is to service the interest in outside-the-mainstream opportunities for foodies, delivering pasta that is kid-friendly and healthy, explained Founder and CEO John John Aron.

“You can’t make money making penne if you’re a small company,” said Aaron. By creating high-end pasta in unique shapes that are fun and attractive for families, The Pasta Shoppe’s unique product has found a niche on dinner tables throughout North America, South America and Asia.

“We run a technology business at the top,” observed Aaron, which helps guide “30,000 square feet of people who are converting 43,000 pounds of flour that comes in from North Dakota into different shapes during the day.”

The Pasta Shoppe differentiates itself by offering a massive amount of product offerings. While an average pasta-maker might have 6 to 12 SKUs (stock keeping units), The Pasta Shoppe has around 250, as the company creates a variety of shapes and styles for different occasions and seasons.

Overseas markets account for between 10 and 15 percent of pasta the company produces.

Aron said that the international component of his business contributes to The Pasta Shoppe’s ability to build its domestic workforce.

One benefit of foreign markets for The Pasta Shoppe is to extend production capabilities for its seasonal products. “From a financial perspective, we’re making Halloween pasta in June and Christmas pasta in July [for overseas markets],” explained Aron, compared to the American market, for which the company produces most of its Halloween pasta in August and September.

“The greater distances traveled allow us to start certain seasons of our year earlier,” said Aron, and “those rolling production capabilities translate into rolling cash flows.”

Innovation is the key to global success.

“We’ve been on the web since 1995,” highlighted Aron, adding that, “nobody’s been on the web that long in the specialty food business.” Today, the company leverages its web presence as well as social media platforms including Facebook, Instagram, Pinterest and Twitter to reach a global audience.

For The Pasta Shoppe, challenges are often country-specific. While distributors can act as a middleman, the support comes with a fee. “One of the reasons you have an agent in Japan is the division of the workload and their home court advantage,” said Aron, ”If I didn’t have that middleman, we would both be more exposed to the harshness of the Japanese customs clearance.” In the case of The Pasta Shoppe, it was cheaper to have the agent handle the issues in the Japanese market and allow the team to focus on productivity.

At the same time, those difficult-to- penetrate markets like Japan can often smooth entry into others. “Japan is a linchpin knowledge base for us,” shared Aron.

Globally, “with the dollar at a 14 year high, my margins are going to be squeezed, without a doubt,” observed Aron. “You can’t sell a 30 percent higher price for the pasta to cover the currency failure, so you’re really tested in that environment.”

He worries that, “when you see major currency changes, they’re typically not blips. They tend to be five year trends.” Even with those headwinds, his global business “still happens,” which he attributes to a secret sauce of a lean business model, innovation and long- term customer value.

U.S. government services can help small businesses target and connect with customers abroad. The Pasta Shoppe has benefited from the support of the Southern U.S. Trade Association (SUSTA) program, a partnership with the U.S. Department of Agriculture, which helps promote small food and agriculture businesses in foreign markets. Aron noted that the program can subsidize tradeshow and marketing costs for companies looking to go global. While the resources are helpful, Aron worries that government assistance can be slow-paced, and that more real-time advice would benefit small businesses as they take steps to cross new borders.

For entrepreneurs looking to grow their business into global markets, The Pasta Shoppe founder provides two pieces of advice: “Make sure your innovation is right and make sure you’re fully in control of your supply chain.”

Aron also suggested that partnerships with platforms like Amazon provide ta remendous opportunity for small businesses. “The ability to partner with a company like Amazon can be a game changer,” said Aron.