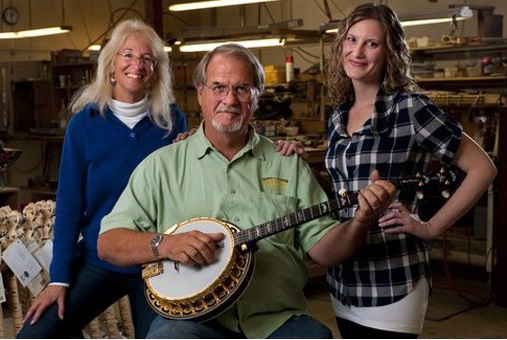 Husband and wife duo Janet and Greg Deering have been manufacturing banjos for over forty years. Their philosophy is simple: build what the customers ask for with the greatest quality and value in the world.

According to Greg, attention to detail and customer care has led them to be the largest manufacturer of Banjos in the United States, with a total of 49 employees. Rather than build a banjo that they believe the customer should use, Deering Banjo works closely with the customer to craft an instrument that they want to play.

Deering Banjo’s global journey began years ago when Janet signed up to attend a music trade show in Frankfurt, Germany. “It only took about 3 years of that show to expand our exports to up to 30 percent of our business,” Greg said.

While tradeshows remain important, the team emphasized the vital role that the internet plays in the company’s international business today.

Jamie Latty, Vice President of Sales and Marketing, highlighted that internet search and analytics tools are cost-effective tools to reach customers and gain insights into how to focus their marketing and outreach efforts.

“Our customer base recommending us unsolicited by us to other potential customers over social media is probably the number one reason people keep coming to us and why our brand is growing so strong,” observed Greg.

Many of the dealers in the company’s networks also have a large internet presence, which further adds to Deering Banjo’s international reach. Greg explains, “when we link up with other people that are strong on the internet it allows everyone to expand and reap the benefit of all of that. It takes on a synergy that we couldn’t accomplish by ourselves.”

Deering Banjo relies heavily on social media outlets, such as Instagram and Facebook, to increase their visibility in a close-knit community of banjo players.

Latty underscored how tools, such as Hubspot, allow them to increase productivity by providing a comprehensive inbound marketing tool that binds together email, e-commerce and more. It allows the team to see everything in one area and take the appropriate action.

While the Internet and social media play an important role in sharing feedback of existing customers and growing the customer base, the personal interaction remains vital.

Deering Banjo has mastered the balance between online service platforms with offline care. “You can’t be all electronic. You have to have that warm and fuzzy voice on the phone that actually speaks to customers when they call,” says Janet.

Having found success internationally, the Deering Banjo team seeks to continue developing overseas markets. With a new distributor in China and a recent trip to India, they are eager to share their beautifully crafted banjos with new customers in fast-growing markets for American exports.

Deering Banjo faces several challenges with overseas markets. Shipping costs and tariffs tend to be high for banjos, and Latty explains that the company has to keep a close eye on exchange rates and other factors that could impact sales.

Another challenge has been complying with the Convention on International Trade in Endangered Species (CITES) regulation, a well-intentioned regulation pertaining to wood culled from endangered species, including rosewood, which the company had used to make banjos. Since the regulation called for extensive documentation on all instruments shipped internationally that contain any amount of rosewood, Deering Banjo discontinued the use of rosewood scraps and turned to alternative materials, which means that those scraps are no longer put to good use by the company.

For SMEs looking to engage in global markets, Greg stresses the importance of understanding a given market during the early stages of your growth: “We were very fortunate very early on in our company to understand how to make sure you get paid when you export to different countries that have laws that make it impossible to collect a bad debt.” Latty adds that it is also important to know what is out there – for instance, they just recently discovered EXIM Bank, despite being in business for over forty years. “It is a hugely valuable resource that we were working on implementing. We wouldn’t have known it existed had we not found out about it from the World Trade Center. There are definitely programs that could be a very easy fit to help [small businesses and startups] make the global reach a little less daunting.”

While they have not yet worked extensively with government organizations, Greg noted that the Commerce Department has reached out to Deering Banjo and shared different avenues of resources to provide assistance in growing internationally, including U.S. embassies abroad for instance.

Greg adds,“the world is more accessible now than it ever has been, sometimes its just not being afraid to reach for the business. Our philosophy is: when an opportunity presents itself, we don’t say no – we grab ahold of it.”