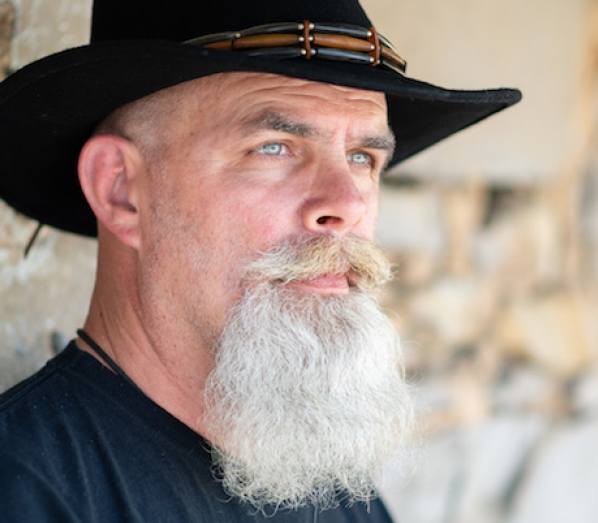 Buck Creek Stained Glass is an Alabama-based glass studio specializing in the design, construction and restoration of stained glass windows, doors and custom pieces. The owner and artist, David Schlueter, has over 30 years of experience working with stained glass.

For David, using social media was not his first instinct, but he recognized the need to leverage technology platforms in the digital age. Buck Creek Stained Glass first launched its Facebook business page over a decade ago. Today, the platform helps elevate the company art and services — reaching new audiences along the way.

David often shares videos demonstrating his craft in action and customers are able to select services or book appointments directly through his Facebook page. Still, David notes that it is difficult to keep up with new tools and devote time to learning how to manage new technologies.

Raised by adoptive parents, David was in his thirties when he discovered that he descended from the Ojibwe people of the Upper Midwestern United States.

Native American and Alaska Natives are members of the original Indigenous Peoples of North America. Today, there are 574 federally recognized Indigenous Nations.

After connecting with his birth mother and starting to learn more about his heritage, David was hesitant to highlight his culture alongside the business — both online and at his brick-and-mortar location.

“When this all came out, I had been not promoting my heritage in business because especially in the south it doesn’t work well,” he explained. “I didn’t really incorporate anything about my background for a long time because I really didn’t know much about it. I had to do a lot of studying.”

“I started to find out more about my clan and my tribe, and I slowly started to incorporate it into my work. I’m very well known for my abstract designs, that’s where it fits into my work,” he explained.

David cites Facebook’s Boost Leaders Network as a key to his digital success. He joined the community of entrepreneurs to learn from fellow business owners and share resources. “I get a lot of support from the Facebook group. [Through the network] I met a woman who has taken me under her wing with social media. She’s going to help get me up and running with Instagram,” he explained.

Digital platforms have also helped expand David’s reach and brand awareness. After a digital issue of a local magazine featured David’s work, through social media, it reached a company in France. The interest resulted in a Buck Creek Stained Glass creating a spread for a French publication.

Like many small business owners, David sees social media is an affordable solution to finding global customers and entering new markets. By leveraging Facebook, Instagram and Twitter, he can display art digitally around the world and organically build brand recognition in a niche market.

Known for his restoration work, David once restored a damaged church window from Germany that was shipped to him in numerous pieces. “I also buy a lot of my materials overseas, glass specifically — Germany, the United Kingdom, Italy, Turkey, Ukraine,” he explained.

David’s advice to government officials is to help small and medium-sized businesses by simplifying documentation and administration processes.

“Just exporting to different countries, whether I’m selling or importing, it is a nightmare,” he emphasized. “I’ve had glass on the dock for six months before. For a small business, if you can’t get your materials for six months you could be dead.”